This week: Get back to the garden with Blackman Cruz and Studio Tutto; imagine a better future with Robert Longo at Jeffrey Deitch Los Angeles; cheer the holidays and the World Champion Dodgers at Dodger Stadium; hear from Janna Ireland and Paul McClean at the LCDQ Virtual Design Summit; and go on a virtual tour of Ray Kappe homes and learn about the architect’s legacy.

1) Blackman Cruz and Studio Tutto “Back to the Garden” Mural

The Los Angeles design and furniture gallery and dealership Blackman Cruz is displaying admiration for the native flora and fauna found in California. Blackman Cruz co-founders Adam Blackman and David Cruz took inspiration from the words of singer Joni Mitchell: “We’ve got to get ourselves back to the garden.” So they tapped women-owned art and design team Studio Tutto to create a large-scale visual statement to adorn the gallery’s 125-foot north facing exterior wall, located at 836 N. Highland Ave. In addition to the creation of the new garden-inspired mural, Blackman Cruz is sending native California seeds from the Theodore Payne Foundation to friends and clients.

“As we witness catastrophic and unprecedented threats to the environment due to climate change, we need to continuously renew our commitment to both admire and protect the flora and fauna that makes California so special,” said Adam Blackman of the new project. Adds Sofia Lacin of Studio Tutto: “Mitchell’s invitation to get back to the garden — to a universally nourishing and alive space — couldn’t be more relevant to our moment.”

When: On display now

Robert Longo garnered attention in the 1980s for his Men in the Cities series — large-scale, hyper-real, black and white drawings and prints of writhing, sharp dressers. Now he has taken on the big themes of our time: political division, race, immigration, gun violence, the climate crisis, the pandemic, and more. ‘Storm of Hope’ is a survey exhibition of drawings on show at Jeffrey Deitch Los Angeles . Says the artist: “My work is like ripping chunks of the world out and offering to the viewer to contemplate.”

Central to this presentation are three drawings depicting symbols of the three branches of the US government: the Capitol, the Supreme Court, and The White House, all conveying an ominous sense of political urgency. Longo’s notorious work ‘Death Star‘, made from 40,000 30 caliber bullets representing the number of gun deaths in the US in 2017, will also be featured alongside new works addressing the climate emergency, the California wildfires and racial equality. 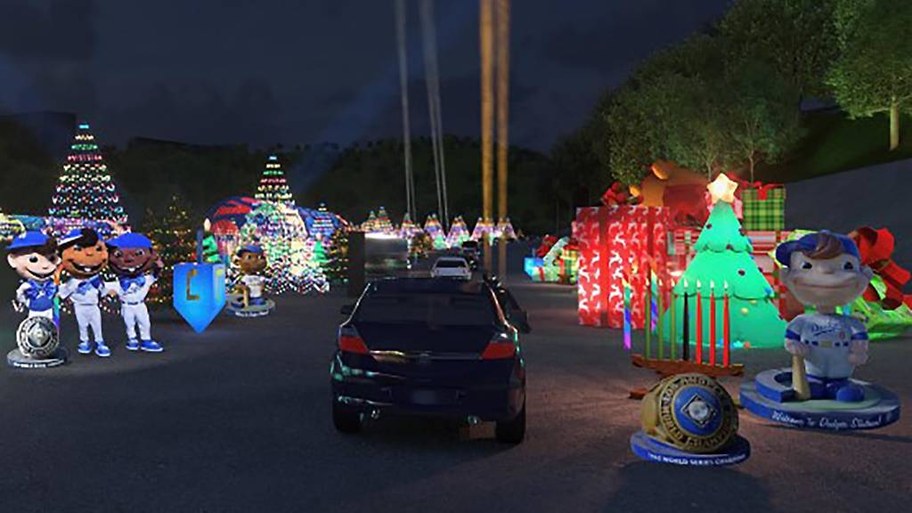 Photo Courtesy of MLB and the Los Angeles Dodgers.

The Dodgers won the World Series in October, then used Dodger Stadium for voting in November. So what will they do for Angelenos in December? The 2020 World Champion Los Angeles Dodgers are hosting a drive-thru Holiday Festival, complete with a light show, LED video displays, fake snow, and interactive installments honoring the Dodgers and celebrating the holidays. Through December 24, you can cruise through Lot 10 at Chavez Ravine, exulting in the spectacle of the season and cheering the home team heroes.

Advance, timed tickets are required and you’ll need to remain in your vehicle. Please bring your patience – even with timed tickets, long queues for entry are expected. 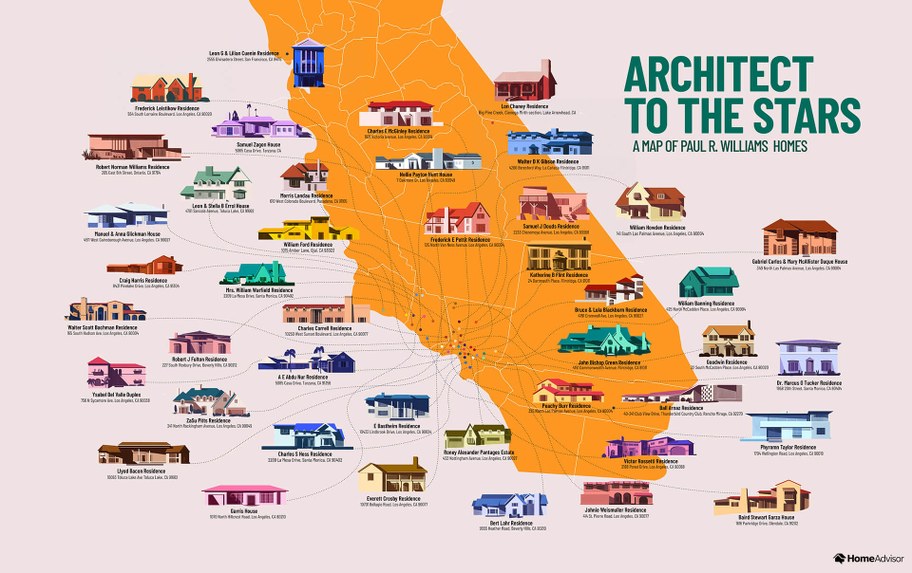 Paul R. Williams work is getting belated and widespread recognition. HomeAdvisor, a consultancy, has created this map locating 43 of his most notable California homes.

Every year La Cienega Design Quarter hosts an annual day of events and talks called Legends. This year, like much else, it has gone online. So from the comfort of your sofa hear famed interior designer Michael S. Smith in conversation with journalist Margaret Russell. They will talk about their new book, “Designing History, The Extraordinary Art and Style of the Obama White House.”

And there will be a spotlight on the work of Paul R. Williams. Frances Anderton will talk with the authors of two new books on the late African-American architect: “Master Architects of Southern California 1920-1940, Paul R. Williams”, by Stephen Gee, Architect Marc Appleton and Bret Parsons; and Regarding Paul R. Williams: A Photographer’s View, by Janna Ireland, a visual paean to Williams, with intimate black-and-white photographs as elegant as the designs themselves. Note: Janna Ireland will discuss her book Saturday as well, with longtime preservationist Cindy Olnick, at this online event hosted by Hennessey + Ingalls Art and Architecture Bookstore.

Where: Online. You can register here.

Ray Kappe (1927 -2019) was a celebrated educator, having founded the architectural school SCI-Arc, and architect who developed his own variant on California Modernism. Continuing themes explored by Lloyd Wright, Richard Neutra and Rudolf Schindler, Kappe’s buildings are remarkable for their multi-level, flowing spaces and tough masonry, glass and warm woods that worked organically with their environments. In later years he designed modular, sustainable and prefabricated homes.

This Thursday architect and historian Alan Hess will give a virtual tour inside some of Kappe’s most extraordinary residential designs from the 1970s. He will explore Kappe’s legacy, including his role in shaping the Modern movement, especially in Southern California. The tour will also include comments from Kappe’s wife Shelly, an architectural historian and their son, Finn Kappe.

And while on the topic of SCI-Arc…. this Saturday the school will explore another dimension in architecture: queerness. Find out about it here.

Our Holistic Approach to Home Design