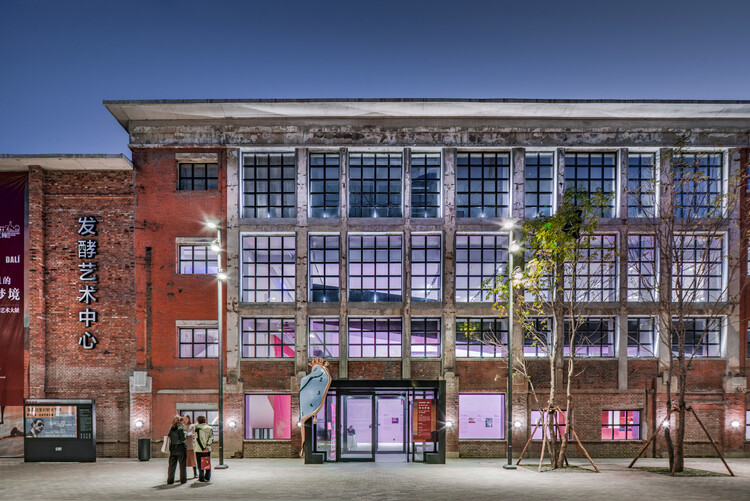 Text description provided by the architects. Design Background. Before the 1990s, northeast China had the largest urban population in China, and since then the area has formed its own urban culture much earlier than other areas. Factories not only construct the daily life of the people living there but also construct the culture. The design of factory renovation should first begin with the iteration revolution of industries, and to talk about the birth of Red Plum Culture and Creative Park, we need to first talk about the city.

Tie’xi district is located on the west side of Chang-Da railway, where the east and west railways intersect and so do the south and north ones. The closed quadrangle formed by that is the Tie’xi district in Shenyang. Red Plum MSG factory, with 13 industrial plants, was one of the many factories in Tie’xi, and its history goes back to 1939. Its different architectural styles together with the early building as the main plant have recorded the historic values transforming from a factory to culture and creative park.

Design Strategy. The 4 buildings in the Park are in different sizes and damage levels, showing an interesting diversity in space. The layout of the buildings reflects the original production lines intact, where raw materials coming into the factory from the railway, unloading on the platform and entering the warehouse, samples picked up and sent to a lab for test, materials fermented in fermentation plant and at last purified in refinement workshop. The design starts with the relation between the park and the buildings. It brings new cultural functions into the old buildings, repairs, solidifies and cleans the damaged buildings, and re-open the park to the public.

The six-folding gable of the raw material warehouse in # 1 represents the large storage capacity of raw materials back in those years, which also represents a great productive force. The storage of raw materials symbolizes yield capacity and power. The building stands in the southeast corner of the park, adjacent to the streets. # 1 is to host large live-house performances, attract new cultures, gather crowds, and embark on a colorful cultural trip. #2 is the smallest one among the four buildings, but it is the most important link in the production process. From there, the test data would be sent to each workshop as a guide for production. In the meantime, its east facade faces the main entrance of the park, while the south façade faces the greenbelt mall and the north the main road.

The facades on those three sides are linked and connected. The south facade is severely damaged, so the design restores the original dimension and expands the entrance, fully displaying the openness and tolerance of the building to the city. The design keeps the building’s out-put function and builds it as a cultural and creative market. Adopting vertical U-shaped glass, the height of the original chimney reappears. With semi-transparent milky whiteness and the illuminating effect brought by night lights, it has become an iconic signal tower that no one would miss once entering the park. Compared with other buildings, # 12 is not so remarkable. But its internal space is colorful, and different floor heights are extremely interesting.

The owner would love to make this building as a creative bookshop named Red Plum Bookstore, combining office and showcase functions. It is a multi-functional space for reading, drinking coffee, open-space office, small-scale show, and product release. The arrangement starts to form the 1st floor and unfolds as the floor height varies, and the circulation goes from motion to stillness. The bookshelves are standing on the north side, where it faces the main road and sports square in the park, purposely to indicate the function of the building to the passers-by and attract more people to visit.

#16 has the most stories to tell. It is medium size and located in the center of the Park. A migrating-like gallery is the best new home for the building. In order to put large equipment, there were lots of openings in the floor slabs. The renovation selectively keeps the shape of the original openings and replaces them with glass floor slabs. The triplet arch in the building shows the craftsmanship of the plant construction back then. It is a classic combination of structural and space beauty, and a place renovated for large exhibition halls of a gallery. Through the glass facade facing the main road, the ramp connecting the new # 2 and #3 communicates with other buildings and activities in the park.

The triplet arch keeps part of the original two fermentation tanks, in memory of the vigorous production era that once took place in this space. As the gathering place of the cultural creative industry, the Culture and Creative Park is part of the updates in the city. Time flies, a century has passed, and industries are constantly improving and updating. In the past 30 years with the new production methods and forces coming up, those factories and affiliates built by the old production force need to be updated constantly, adapting to all the functions required by the new productive relations.